Ribbon of Black Satin stemmed from my love and fascination with London’s river. I’ve

lived by the river for about 15 years, to the west of the city and have now moved to a house about 200 yards from it, in Petersham on London/Surrey border.   The story of how I shot this series of images, which cover the tidal thames, from Tides End at Teddington Weir, to the mouth of the river just past Southend in Essex,  is told HERE on the Daily Express website Express.co.uk. The complete exhibition plus a book and iBook will be available from mid 2016.  Shooting the images was made possible by the introduction of what was at that time the world’s most sensitive digital camera. for the technically inclined, this gave be the abilityto shoot at over 12,000 ISO, which is black cat in a coal cellar at midnight territory. In fact, on one pic, shot by the 5 watt red running light on a Metropolitan  Police boat of the Thames Division, I over exposed and had to correct the raw file to get the image right. 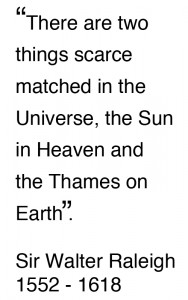 I have to thank various organisations for their help in shooting this, Three police forces aided me in this project The Metropolitan police in London and Essex and Kent Constabularies in the lower reaches of the river.  As an aside, if you ever want to be really cold, try a trip at 70 MPH on a rib in November, at minus 15 with the wind chill, across the Thames Estuary on an open police RIB patrol boat. hat is the coldest I’ve ever been. I wold alo like to thank the Thames Clippers, for taking part in this project and giving an insight into the commercial aspects to river traffic in the capital.  Last but not least the RNLI who operate two lifeboat stations in London, and the crew of the Chiswick Lifeboat in particular, for taking be on patrol on the upper reaches of the tidal Thames.